The Society for Underwater Technology (SUT) has launched a virtual introductory course on offshore site investigation and geotechnical engineering in the offshore environment. This is the online equivalent of the face-to-face course successfully run by the Society’s Offshore Site Investigation Group (OSIG) for a number of years. The online course is spread over four half days for two weeks (Tuesday and Thursday mornings) on 16, 18, 23 and 25 November.

Aimed at non-specialists, it aims to provide a broad overview of the offshore market, and how the data acquired is applied to maximise the value of offshore projects in both the offshore oil and gas and offshore renewable energy sectors.

The face-to-face course has built a formidable reputation explained Chery Burgess, CEO of the SUT:

“The face-to-face course has been running for 25, or so, years and has attracted well in excess of 500 delegates. We are delighted to add an OSIG course to our virtual offerings which also include our Virtual Subsea Awareness Course and an Introduction to Offshore Wind Energy Course, both of which have attracted delegates from around the world.

“The first two days have a geophysical theme, and then in week two the attention turns to the geotechnical side of things. We have an impressive list of industry and academic experts covering a wide range of topics, from planning an offshore site investigation through technical and operational aspects of data acquisition and reporting, to the practical use of the data in geohazard assessment and foundation design.

Each half-day session will include a set of oral presentations, followed by small-group practical activities with the scope to reinforce the knowledge and get further insight on the topics presented. Small-group activities will also provide an opportunity to discuss with experts in the field, while creating an engaging and interactive environment. Alongside knowledge sharing, the course provides an excellent opportunity to network within the offshore industry.

Information on the CPD approved course is at www.sut.org/event/an-introduction-to-offshore-geophysics-and-geotechnical-engineering-3/

The course fee is £300 for SUT members and £395 for non-members. (excluding VAT where chargeable).

Registration is now open for the joint 3-day ‘Smart Operations: Driving a Lower Carbon Future’ virtual seminar organised by the Society for Underwater Technology, The Hydrographic Society in Scotland (THSiS) and the international Marine Contractors Association (IMCA) and taking place on the afternoons of Tuesday 2-Thursday 4 November.

As Cheryl Burgess, CEO of the SUT explained:

“Our businesses continue to operate in mature regions – stable, predictable environments that can generate significant revenue. How we maximise profitability today is a significant contributor to funding lower carbon initiatives.

“Mature regions expect a reduction of large greenfield projects – with operator focus shifting toward smart operations: efficient exploration methods, short-cycle projects and lower OPEX. This promotes lower development costs, standardised infrastructure and increased utilisation during production costs down. Our challenge is to deliver development in the most efficient and sustainable way possible, maximising value today, tomorrow and in the future and this is just what our expert speakers will be talking about.”

On Day 2 attention turns to ‘A Potential Difference – Subsea Power’ with a keynote address by Gael Chouchelamane of EC-OG and speakers drawn from Teledyne, University of Houston; and EC-OG talking about ‘Power for subsea applications’; ‘Subsea power generation and storage using ionized static electricity’; and Driving a low carbon future – today, tomorrow & future’.

‘Addressing the Big Issues – Decarbonisation’ is the topic for the final afternoon of the seminar with speakers from Versatec, Houlder and OMV Petrom in the spotlight covering ‘You have the information for data driven decisions, but you are not seeing it!’; ‘Pathways to fleet decarbonisation for the offshore support sector’; and ‘Normally uncrewed installations’.

The full programme and registration can be found online at www.sut.org/event/smart-operations-driving-a-lower-carbon-future-2021/. A 3-Day pass costs £30 for members and £50 for non-members (excluding VAT where chargeable). SUT Individual membership is £76 per year. To join, visit www.sut.org/sut-membership/ or e-mail jane.hinton@sut.org. 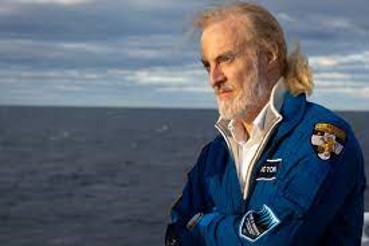 London UK, and Washington, DC, US  — The Society for Underwater Technology (SUT) and The Marine Technology Society (MTS) are proud to announce that the 2021 Captain Don Walsh Award for Ocean Exploration has been won jointly by Commander Victor Vescovo, USN, Retired and Patrick Lahey for the 2019 Five Deeps Expedition and further dives of scientific or historical interest in subsequent years.

In 2015 Commander Victor Vescovo proposed a goal of finding and diving into the five deepest spots in the world’s ocean with dives taking place in the Atlantic, Southern, Indian, Pacific and Arctic oceans. This feat required not only a unique diving submersible but also fielding a specially equipped survey and support ship. 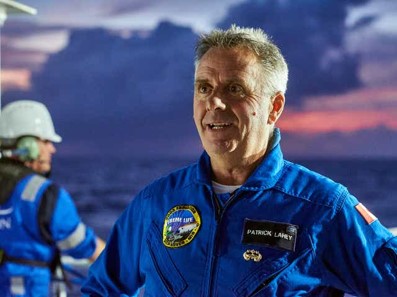 Patrick Lahey and the team at Triton Submarines responded to Commander Vescovo’s project by creating a revolution in deep submergence capabilities. Patrick led a team of marine architects, designers, engineers and technicians to produce the Triton 36000/2, the first – and to date, only fully accredited (DNV/GL certified) human occupied deep submersible capable of routine exploration at full ocean depth. Commander Vescovo’s submersible of that design is the ‘Limiting Factor’. Lahey and the Triton Submarines team took the design from concept to build, testing, trials, shakedown, initial deployment and through to the successful completion of the Five Deeps Expedition. 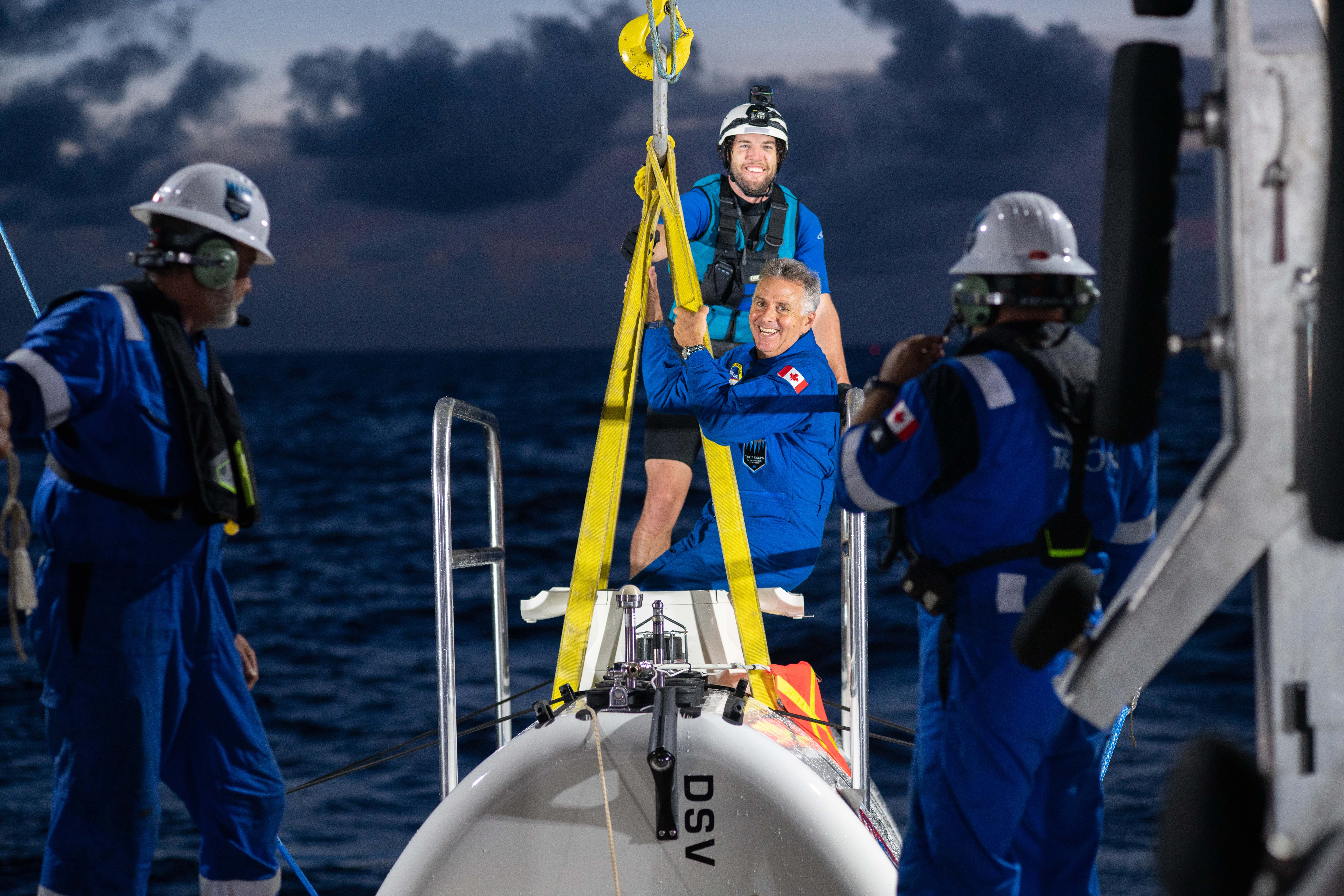 Awarded jointly by the SUT and MTS, this esteemed award is named after American oceanographer, explorer, retired naval officer, and marine policy specialist Captain Don Walsh. Walsh and co-pilot Jacques Piccard were aboard the bathyscaph Trieste when it made its daunting record descent on January 23, 1960 into the deepest point of the world’s oceans – the Challenger Deep in the Mariana Trench. The award recognises outstanding, sustained, international contribution to the development, application, and propagation of marine technology toward the advancement of ocean exploration.

“It is a true honor to be recognized by the experts of the SUT and MTS, alongside my friend and colleague Patrick. I would have to emphasize that he and I were simply the leaders of an extraordinary team that enabled our success – and we certainly stood on the shoulders of giants like Captain Walsh and James Cameron who developed extraordinary, full ocean depth technologies before us,”

“I am honored and humbled to have been chosen as a co-recipient of this prestigious award by the MTS and SUT together with my client and friend Victor. Developing the Triton 36000/2 was the most challenging and rewarding undertaking of my professional life so far. I was incredibly fortunate to work with a remarkably diverse team of talented, creative, and resourceful people who pioneered a revolutionary new submersible that enabled the successful completion of the Five Deeps Expedition. To receive the award from Captain Don Walsh personally is particularly meaningful because Don is a friend, mentor and living legend,”

“The contributions of Commander Vescovo and Lahey to the advancement of ocean exploration are significant, and collectively SUT and MTS are honored to present them with this award in the name and legacy of Captain Don Walsh. It is exceptionally fitting to honor them both as a team as it is a true demonstration to how exploration and technology work in tandem to create ingenuity and progress,”

“What excited the judging panel was that this brought together the perfect combination – an explorer with a zest for life and discovery and superb technology. Indeed, it would be unbalanced to nominate Commander Vescovo without acknowledging the revolutionary application of modern marine technology achieved by Lahey and the team at Triton. Technology lies not only at the heart of the names of both societies but is key to our ethos and our membership,”

Diving for historical and scientific purposes 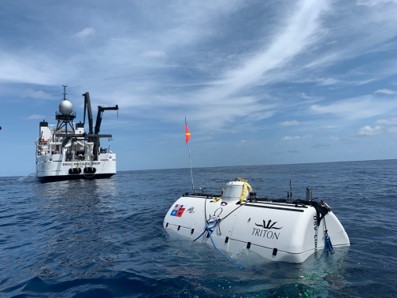 Following the well-documented Five Deeps Expedition dives https://fivedeeps.com/ in 2019, further dives have taken place. In 2020, Commander Vescovo partnered with the French Navy to dive on the wreck of the submarine Minerve, and with the International Hydrographic Bureau and the Monaco Blue Initiative to explore the deepest spot in the Mediterranean. He then partnered with the King Abdullah University of Science and Technology (KAUST) in Saudi Arabia to conduct scientific dives to the unique brine lakes at the bottom of the Red Sea.

Commander Vescovo has mapped over 1 million square kilometres of ocean floor and donated all his data to the Nippon Foundation General Bathymetric Chart of the Oceans (GEBCO) Seabed 2030 project.

After a second year of dives into the Challenger Deep, which included the first women to dive to the deepest depths, former astronaut Kathy Sullivan, the Pressure Drop surveyed the entire northern “Ring of Fire” from Guam to Alaska, discovering, mapping, and naming over 70 new underwater features. During the 2021 dives, Commander Vescovo marked a personal 12th dive into the Challenger Deep, and discovered the deepest wreck in history, the U.S. World War II destroyer Johnston off the Philippine Island of Samar.