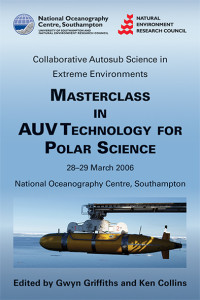 Proceedings of the international Masterclass, held 28–29 March 2006 at the National Oceanography Centre, Southampton

Maritime polar environments are some of the most challenging areas on earth. Autonomous underwater vehicles (AUVs) offer tremendous potential as one solution to cost–effective data–gathering for science and industry in these inhospitable areas. The International Polar Year 2007–2009 provides a particular focus for science.

In preparation for an upsurge in the use of AUVs for polar research, this Masterclass –organised by, and held at, the National Oceanography Centre, Southampton, and supported by the UK Natural Environment Research Council –brought together an international group of engineers and scientists to assess current performance and future requirements. The contributed papers provide both a resource for new AUV users and critical analyses of what remains to be achieved if, after the International PolarYear, AUVs are to be a lasting legacy as observers of the polar oceans.