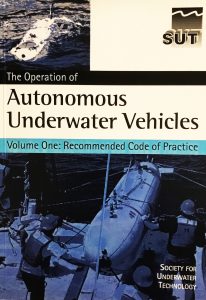 Volume One: Recommended Code of Practice

This SUT publication, produced by the Society’s Autonomous Underwater Vehicles Legal Working Group, provides the AUV community with a Code of Practice for use and voluntary adoption as a community standard. The concept of AUVs has been in evidence for at least 20 years with a wide range of operating capabilities and technical solutions. However, the safety and legal framework for their use has yet to be properly formulated. The wide and everyday use of the technology is still relatively immature as an established part of the underwater marine technology scene. Early AUV deployment and research, as would be expected, has its roots in the military maritime operational requirement, with major maritime powers such as the United States and Russia being examples of leading developers of an early military AUV capability. However, more recently in the UK both the civil research and industrial communities have developed ocean going AUV capabilities of international repute, examples being Autosub as a research platform and the Marlin vehicle being offered as an industrial AUV platform.

AUV development and, more importantly, routine usage is on the increase. This is partly being driven by the costs of ship time incurred when doing routine operations such as pipeline inspection or simple repetitive oceanographic measurements.

This growth of AUV usage has been under a loose legal framework and because of current legal status of the technology, this has meant the AUV community has had to be self regulating. This Code is in some way and expression of that self–regulatory approach.The Recommended Code of Practice has been produced by the Society’s Autonomous Underwater Vehicles Legal Working Group to provide a pertinent reference document for the safe and efficient operation of AUVs.