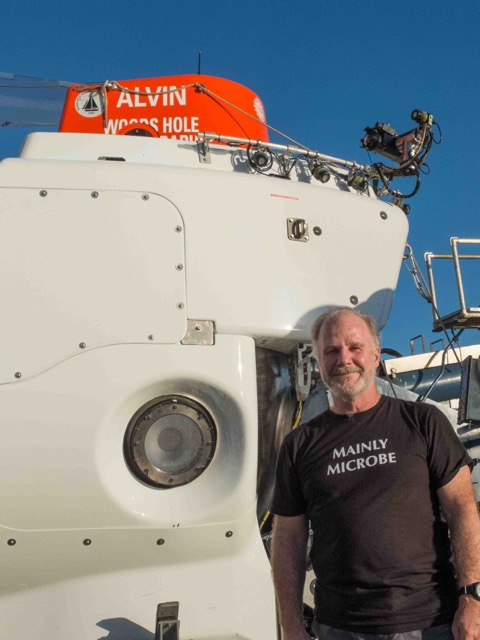 Congratulations to Dr Graham Shimmield who has been awarded the SUT President’s award 2014.

Graham Shimmield graduated from the University of Durham in Geology in 1981, and received a Ph.D. in Marine Geochemistry from the University of Edinburgh in 1985. He was appointed as Edinburgh’s Lecturer in Chemical Oceanography in 1984, and promoted to Reader in 1995. In 1996, he moved the Scotland’s west coast to become Director of the Scottish Association of Marine Science (SAMS) and the NERC-funded Dunstaffnage Marine Laboratory near Oban, a post he held for 12 years.

In 2000, Graham was awarded the title of Honorary Professor at the University of St Andrews. He is a Fellow of the Royal Society of Edinburgh (1998), and the Society of Biology (1999), and has published over 65 scientific peer-reviewed articles.

Whilst at Dunstaffnage Graham served on the international scientific steering committee of the Joint Global Ocean Flux Study, and several major UK and European science programmes. He establishing the institution’s reputation in Arctic oceanography through their Northern Seas Programme and was a member of the UK International Polar Year Committee. He also helped establish the University of the Highlands and Islands, and chaired their research programme, and was Chairman of the European Census of Marine Life project from 2004-8.

In March 2008 Graham crossed the Atlantic to join the Bigelow Laboratory for Ocean Sciences in Maine, USA, where he holds the positions of Senior Research Scientist, Executive Director and President. Since arriving in Maine, Graham has served on the boards of the Maine Innovation Economy Advisory Board, Maine Space Grant and Maine Sea Grant, and advisory boards for Maine Maritime Academy and Mount Desert Island Biological Laboratory. In November 2011, Graham was named by MaineBiz as one of ten “Nexters” helping to shape the future of Maine’s economy. In February 2013 he was elected to the Board of Trustees for the Consortium for Ocean Leadership.

Graham has served for many years on scientific committees, including the Natural Environment Research Council Science Strategy Board, and he has served as President of the European Federation of Marine Science and Technology Societies of which SUT was a founding institute. He has had significant involvement in marine biotechnology as the Managing Director of the European Centre for Marine Biotechnology, and Chairman of the Board of GlycoMar Ltd, a small biotech start-up.

Close to SUT interests Graham serves as Chair of the INSITE Independent Scientific Advisory Board. INSITE stands for the “INfluence of man-made Structures In the Ecosystem” and is an industry-sponsored project with the overall aim of providing the independent scientific evidence-base needed to better understand the infl uence of man-made structures on the ecosystem of the North Sea.
Graham has indeed been a good friend of SUT over the years, helping to bridge the space between science, industry and academia.

CEO Update – Steve is Moving On