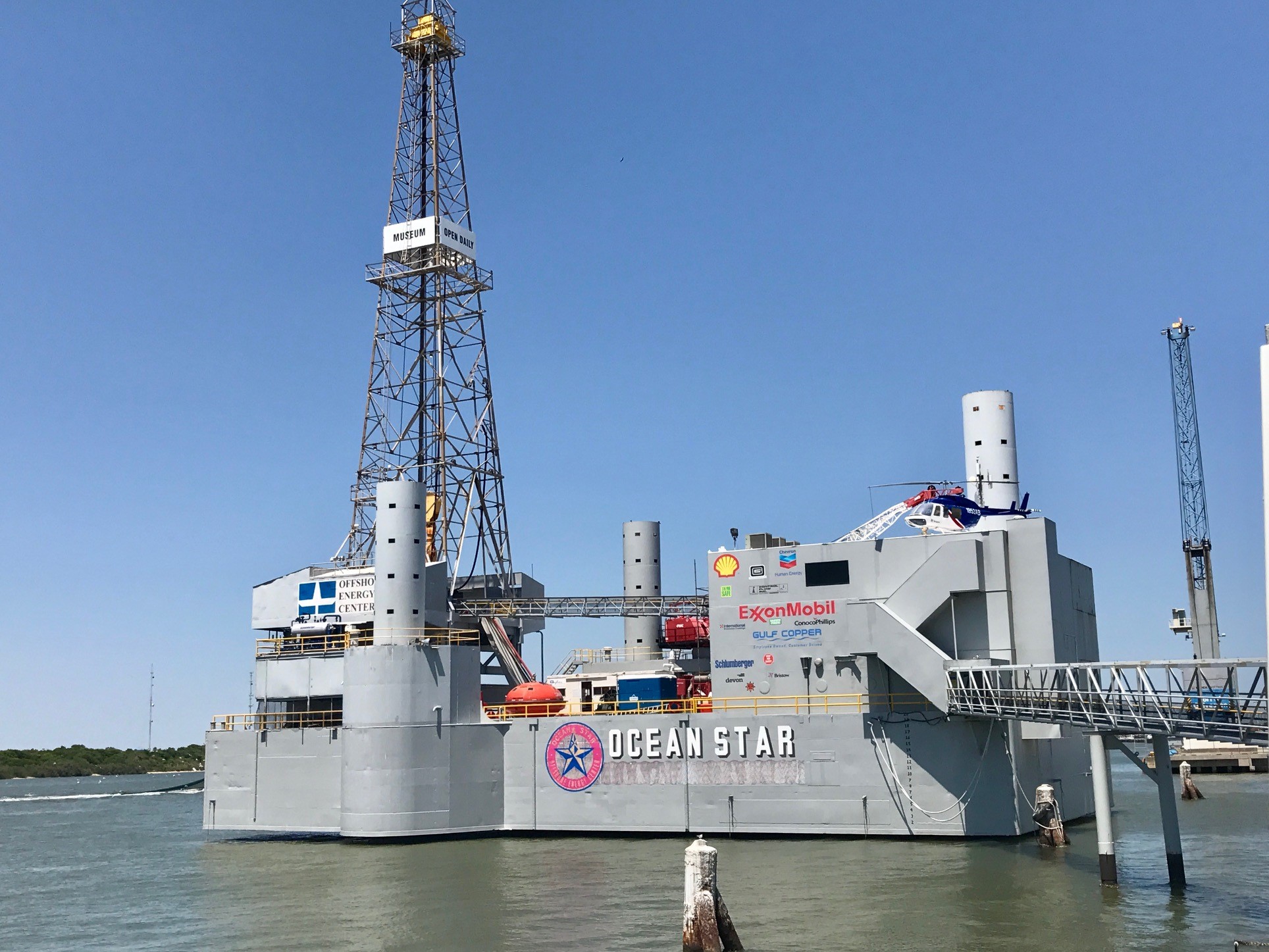 Dear Members and friends of the Society for Underwater Technology. It’s now 8 weeks since I started as Chief Executive, and I’d like to give you an update on what I’ve been doing, and have planned for the next few weeks as we approach the northern hemisphere summer.

My first week at SUT coincided with our attendance at Ocean Business 17 which was held at the UK’s National Oceanography Centre. It provided an excellent opportunity to be introduced to our member companies exhibiting there, and individual members visiting the show. I attended the meeting of the joint SUT – ECOR (engineering committee on ocean resources) Panel on Underwater Robotics, chaired by Neil Bose from the Australian Maritime College in Tasmania, and look forward to being able to contribute my knowledge on marine policy and legal aspects of autonomous vehicle operations to the Panel in future.

On the Friday of that first week I was invited to the Diving Museum, Gosport to attend the unveiling of their exhibit of the world’s oldest diving helmet by John Deane, on loan from the Science Museum of London. SUT have been enthusiastic supporters of the work of the Diving Museum, and I very much recommend calling by to say hello if you are visiting the south coast of England. The museum houses a unique collection of equipment, from the earliest days of ‘barrel diving’ (for salvage operations) through to modern sport diving, hard-hat diving, military operations and diving in support of the offshore energy sector. Housed in a Victorian gun battery, it’s a short drive from the Submarine Museum at HMS Dolphin, which also features a collection of deep diving equipment such as a diving bell and submarine rescue vehicle.

Back at the office for my second week saw my first chance to get to know our London-based staff Jane, Cheryl and Emily better, learn the office systems, and engage with the committee that’s putting together the Offshore Site Investigation and Geotechnics (OSIG) 8th international conference in 12-14th September “Smarter Solutions for Future Offshore Developments”. There’s a first-rate programme coming together and it promises to an excellent event that SUT is proud to be supporting. SUT’s Council also met in my second week in the new role, it’s a very different experience as the Chief Executive rather than as a Council Member! 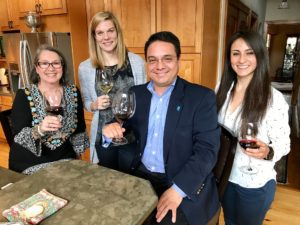 The Houston team of Zenon, Patsy, Araceli and Anna at Patsy’s home

In the third week I attended the London and South East England branch evening meeting ‘Recent developments in the technology of subsea valves for critical applications’ and met the branch members. Next up was my first overseas visit since joining SUT, to attend the Offshore Technology Conference 2017 in Houston. This was suggested by our Chair of Council as a good way to ensure a SUT presence at OTC and an opportunity to meet the Houston Branch. It was a delight to meet up with the SUT Houston core staff Patsy, Anna and Araceli and Chair Professor Zenon Medina-Cetina, and branch member John Allen was an excellent local guide at the enormous OTC complex. Whilst there I was able to hold meetings on decommissioning with Roger Esson of Decom North Sea, discuss US energy policy with a senior staff member of the US Department of Energy, and meet representatives of SUT corporate members including Jukes Group, Wood Group and Castrol. Evening meetings took place with members of the Houston branch committee, and with the local staff. I felt very welcomed and look forward to a long and productive time working with our US colleagues. 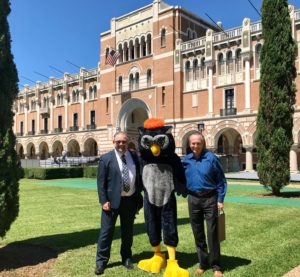 Steve with John Allen at Rice University Houston, with the owl mascot

I was particularly impressed by the connections our US members have built up with the universities to encourage the next generation, and was honoured to meet Professor Fathi Ghorbel at Rice University, and with student Marissa Malinoski who takes a lead with the Galveston section of our Texas A&M university student chapter. The Galveston visit was also an opportunity to see the superb outreach and education facility of the Ocean Star Offshore Drilling Rig Museum and Education Center – it would be wonderful to have such a facility open to the public in the UK too! Overall I learned a great deal from visiting the Houston Branch and look forward to rolling out best practise observed at all of our branches across the SUT family. 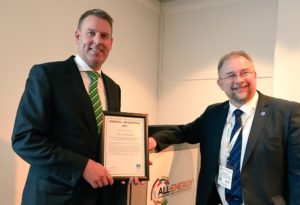 Upon my return from Houston it was straight to Glasgow to attend ‘All-Energy’ where SUT is the Learned Society Patron. Again an opportunity to meet our staff, this time Jacqui and Emma from the Aberdeen Office, as well as a number of our Scotland-based members. I was invited to attend the prestigious energy leader’s dinner at the City Chambers, met many of the leading lights of the renewable energy sector, and the highlight was to present the SUT’s Lennard-Senior Award to Tim Cornelius, CEO of Atlantis Resources Ltd, in recognition of his outstanding contribution to promoting tidal energy. It was good to meet up with SUT’s friend and great supporter Judith Patten MBE during All-Energy, and I look forward to a continued relationship with the growing world of offshore renewables. 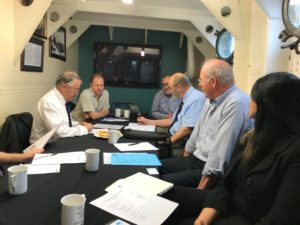 Back to London and an enjoyable meeting with our friends at Reed Exhibitions to discuss SUT’s continued involvement with the Oceanology International series of events. We’ll be playing a key role in the conference sessions at OI China in Qingdao in November 2017 and London in the New Year. I also attended the Diving and Manned Submersibles Committee meeting on board HQS Wellington on 17th May, and the London & South East England branch ‘Lunch at Learn’ about underwriting offshore renewables risks kindly hosted at Charles Taylor PLC on the 19th.

In the next weeks I’ll continue to ‘learn the ropes’ about how the Society works, continue meeting branch members, and promote SUT on social media (follow SUT on Facebook , LinkedIn & Twitter @SUT_news, or my own feed @saltwatersteve) and at meetings and conferences. As a follow-up from a new contact met at ‘All-Energy’ I’ve been invited to speak on deep sea mining, marine genetic resources and rising technologies at the ‘Blue Economy’ conference in Marseilles 30-31 May with SUT’s costs covered by the organisers.

I’m visiting Aberdeen branch at the start of June to attend their monthly branch meeting and get to learn more about the sector there. Later in June I’ll be attending the Assembly and Executive Council of UNESCO’s Intergovernmental Oceanographic Commission, where I’ll come to the end of my two year term as Vice Chair, a role I was elected to when I was Head of the UK’s delegation. Although SUT is not a country and so has no vote at a UN body, we are an Observer Member of UNESCO-IOC in recognition of our strong education and outreach role, and I’m sure we’ll continue to play an active part in the global ‘ocean literacy’ movement. In particular the Member States value our role as a rare voice for industry in the international ocean science, governance and policy world so SUT is helping to ensure that the needs of our members and supporters are fed-in to development of global ocean stewardship, sustainable development under the UN’s Sustainable Development Goals, and wealth creation from ocean resources.

Lots more goes on of course than I’ve highlighted here, and I’d like to say thank you to my staff who have adjusted admirably to having to put up with a new CEO while they are very busy in their day to day roles running the society. I’d like to pay tribute too to the amazing effort put in by our volunteers in the various committees and branches. SUT’s greatest strength are the talented women & men who make it run and adapt to a rapidly changing world.  More news from me towards the end of June.

Thank you for your continuing support. Steve Hall, 22nd May 2017 steve.hall@sut.org